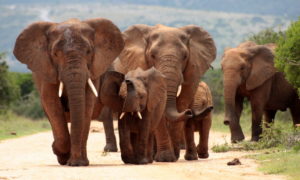 The place where my sister lives now is on the foothill of a mountain range. This place is just on the edge of the city and is surrounded by beautiful green forests and (obviously) the hills. We hardly knew about this place until she got married and moved to her new home. The thing that fascinated us most about this place is that it gets visits by a herd of 18 elephants lead by the Matriarch. I happened to suddenly come across one elephant just a couple of days back.

It was evening. After a long afternoon of lunch followed by shopping, I went to drop my sister at her home. Just after entering the road that leads to her home, our car light fell on something dark a few feet ahead of us. It was a tusker. The elephant was agile and was walking at a faster than usual pace. As all Hindus do, we folded our hands to a Namaste and paid our respect from the car and slowly drove by. I kept looking at it even though it was difficult to see him in the darkness of the evening. I was absolutely fascinated to see the wild animal so up close! It obviously didn’t harm us. Unlike humans, animals don’t harm anyone unless they feel threatened.

I dropped my sister at her home. Home occupants are safe as long as they don’t disturb or irk the elephants. I wanted to return before the tusker goes and brings back the herd of 18. I saw some people on the road shouting and making noise with whatever they could get. I slowed down the car to find out more. A man said that they were making noise to scare the elephant away. Apparently, the elephant came towards the road by which people were still returning from the Tuesday evening market.

This whole experience made me think a lot. I have heard stories from my sister about the residents of that area. The huge open area near the mountain stream is a common playground for the children. It also doubles up as a comfortable strolling place for the ladies in the late afternoons. Every house in the neighbourhood is like a home for everyone there. People are friendly, hospitable and helpful to each other. If one household is celebrating a birthday or a wedding or any such event, the entire neighbourhood gets involved in the entire process. It feels like one big family affair. If one is lacking in a certain thing, another steps in to fulfil that requirement. They share everything with each other starting from drumsticks and lemons from the backyard garden to a personal chutney recipe one discovers randomly. This place is like a close knit village within a rapidly growing city.

When my brother and I were growing up, our area also had a similar surrounding. Though there were not many houses around, every house had children of our age. We played together every evening. Everyone shared their back yard produces and we even shared the fish that we fish out annually from our backyard pond. Neighbours used to voluntarily offer help in fishing. It was a happy time. But slowly the place developed. Roads were widened and made with asphalt. More people came in and built houses with huge boundary walls. We even lost our playground. We became homebound and then we left the city for our educational and professional pursuits. Now, whenever I go home, I miss that openness we had back then. People used to talk to each other standing in their own front yard. A loud warm greeting, a joke, shared laughter, everything is gone now. People have become home bound, more self-centred and self-absorbed. Nobody even greets anyone with that gusto anymore.

Now, coming to think of the 18 elephants; it seems like a blessing in disguise. May be, this natural threat from time to time is keeping the people of my sister’s neighbourhood together. It’s like the proverb – together we rise divided we fall. These residents know that they have to stand together and stand by each other in order to survive this threat. It’s like an unwritten code they follow. It gets reinforced by the frequent visits. With the city growing, very soon the elephants will stop coming. But the bonding of the people will stay, hopefully! Perhaps, such a threat is good for the health of the neighbourhood.

Now, if people in my parents’ neighbourhood had to face any such natural threats, I am certain it would have made the residents more open-hearted and social! They would have understood the values of bonding with the neighbours. May be such a threat or some kind of jolt is required now for them to realise that people need people. Nobody can live a happy life without social interactions.

I thank those 18 elephants for keeping my sister’s neighbourhood happy, hospitable, loving and oh so friendly!