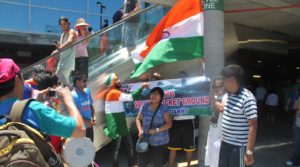 Watching a match in a stadium is addictive. No screen, regardless of its size, can give you the satisfaction, thrill and excitement of watching a match in a stadium. It is a sin if you are in the same city where an amazing match is scheduled and you are not a part of the real audience. On January 3, 2012, we were in Sydney, and yes, you got me right. There was no excuse good enough to not witness the cricket match between Australia and India where Sachin Tendulkar was playing at the Sydney Cricket Ground or SCG. 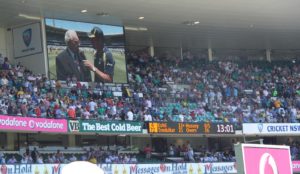 On that day, we went to SCG to watch Sachin play. Immediately after getting down from the cab in front of the Gate A of SCG, we saw Brat Lee and Ricky Ponting. Handsome Lee was inside the gate to our left giving an interview shoot. I immediately wanted to take a pic but by the time I take out the camera, he had left to talk to a group of people standing right behind. Anyway, we walked towards gate E to enter the pavilion. The moment we entered, it was like a trance. I was super thrilled to see the Indian flag all around, Indian people with Indian jerseys and dholak and drums and all kinds of ‘bajaas’ shouting with that typical stadium tone — Indiaaaaa…India! Oh what an overwhelming feeling it was! There were few boys from the Swami Army holding a banner which had Sachin Cricket Ground written on it instead of Sydney Cricket Ground and that immediately got thumbs up from me. I couldn’t help taking a picture of that and with them; I started cheering for India much before reaching Bay 12 where we had our seats. After a few overs and three wickets, the little master entered the ground. 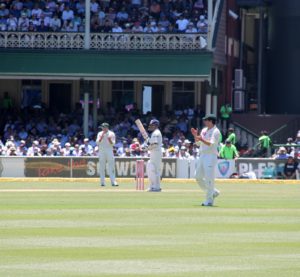 Even though, generally I would sum up Australia as a non-racist country, but I did feel a wee bit of racism in some places during my 20 days trip to this country. What fascinated me here in the Sydney Cricket Ground was that the racism was nowhere to be seen. How sports bind people! So many whites were supporting the Indian team cheering for India with the Indians. There were Indians who were supporting Aussies too.

Here, I saw how Sachin Tendulkar is beyond religion, country and race. The respect and love he commands is unimaginable. The entire cricket ground stood up to welcome him to the ground. My heart was filled with pride. Still Sachin is such a humble person. A true sportsman!

The Indian pavilion (because there were mostly Indians in this pavilion) was an experience in itself. The NRIs, despite living in one of the most liveable cities in the world, Sydney, shouted Indian slogans like Bharat mata ki jai, hum hongey kaamyaab, Indiaaaaaaa India and so on. Songs like “Baar baar haan bolo yaar haan, apni jeet ho, unki haar haan,” “oye oye, oye oho-a”, “jhumma chumma de de” made the entire atmosphere so much fun! I couldn’t stop laughing listening to those oldies and the passion the boys were singing it with. Whenever there was a close escape of an Indian batsman, the audience at our pavilion would sing “all is well”…and that was really reassuring in the game or so did I think. When Virat Kohli was batting, every few minutes, someone was shouting “Kohli ke peeche kya hai, Kohli ke peeche”…. and then, when it was Mahinder Singh Dhoni’s turn to bat, there they go again singing a dedicated song for Dhoni, a.k.a. Mahi. It was predictably the song called “mahi ve”. Lol! It was funny and very very sweet at the same time!

One more thing I have noticed is that people here enjoy the match whole heartedly. They come prepared with food, drinks, clappers, sun screens, sun hats, shades, placards for every situation and everything you can think of. All these are available inside the stadium campus as well. When Sachin got out without making his 100th 100, we were a little disappointed and hence, decided to leave. But the time we spent in the Sydney Cricket Ground will always be a special experience in my life – forever.