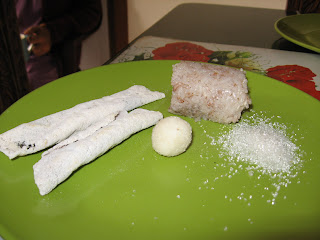 Winter is almost over in India. However, to bid a formal goodbye to the winter season, India celebrates a day that usually falls on the 13th day of January. This day is celebrated with different names in different parts of the country. Regardless of the names, all the celebrations have a connection with the agricultural activities of the farmers. India being an agricultural economy, this is quite obvious. This festival denotes the harvest time of the agricultural calendar. Being an Assamese (someone who belongs to the northeastern state of India, Assam) I am here to talk the way it’s celebrated in Assam.
Out of the three Bihus (Rongali Bihu, Bhogali Bihu and Kangali Bihu), this is perhaps , the second most welcomed Bihu in Assam. The reason , one gets to feast with near and dear ones and the granary is usually filled with rich harvest. Hence, Bhogali Bihu also denotes celebration of prosperity. 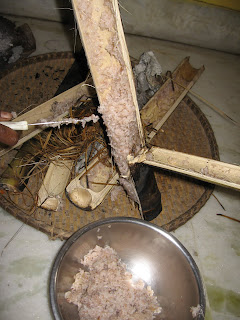 
The first day of the two-day long festival is dedicated to community feasting. Plentiful variety of pitha, laadu and jolpaan are made in traditional Assamese styles which are served to whoever visits the family. On the first day, the farmers along with their respective family celebrate around their Bhoral or granary feasting and enjoying the good harvest. Close families and neighbours get together for a feast at night by the side of a huge bon fire. 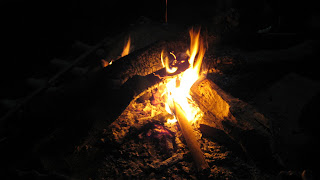 A bonfire
The children and young adults make houses or tomb like structures known as Bhela Ghor and Meji Ghor respectively. These are usually built with the left over haystack from the field. The second day of Bhogali Bihu is marked by burning of the Bhela Ghor or Meji Ghor early in the morning. People pay their obeisance to the God of fire Agni by offering Bihu delicacies especially til (sesame seed) laadu into the fire. The farmers along their family pray in their paddy fields for prosperity and offer puja with traditional rituals. The day is also marked by visits to near and dear ones and by taking blessings from the elders of the family. In rural areas people gather in playgrounds to witness festivities like cock fights, buffalo fights, bulbuli (small bird) fights etc.

In the Eastern Coastal region, where I am residing now, this festival is known as Makar Sankranti. Though, this festival does not have equal importance as in Assam, the festivity related to it is almost similar. In the Indo Gangetic plains, this auspicious day of Makar Sankranti begin with a dip in the sacred Hindu river Ganges. This is followed by a puja of offering water to the Sun God. The holy dip is believed to purify the self and bestow punya. Special puja is performed as a thanksgiving ritual for the good harvest of the year.

Apart from the above mentioned festivals, this time of the year is celebrated in different forms in different parts of the country. In Punjab, this festival is known as Lohri, in Tamilnadu it is called Pongal or Makara Pongal, in Bundelkhand and Madhya Pradesh, this festival is known as Sukarat or Sakarat and is celebrated with merriment and lots of sweets. On the first day of the two-day festival, people throng to the holy rivers in large numbers for a sacred dip. The famous Kumbh Mela is also held on this auspicious time of the year at the four auspicious places of Hindu religion.

In Bihar and eastern Uttar Pradesh, people savour a special rice meal to mark the day of Uttarayan. In Rajasthan, Nagaur Fair marks this festival. People from all over Rajasthan gather at Nagaur to attend the cattle fair and the four days festivities related to it. Besides the usual buying and selling of camel, ox, cows and bullocks, other festivities like cock fights and bull fights also attract the attention of visitors.