Skip to content
The festival of Holi falls in the month of Phalgun or Fagun. Phalgun arrives as the curtain raiser of the upcoming Spring that brings in warm days and new life. Spring is the season of rejuvenation and rebirth. The earth discards its winter gloom and begins to blossom again. To mark this change, Holi flings colour into the Indian landscape and invites the celebration of life. Spirits run high as the preparations for the festivities begin, as households prepare sweets and colourful powder is bought, long syringes called ‘pichkaris’ are made ready with coloured water, water balloons are filled to colour family and friends with as many colours as possible. 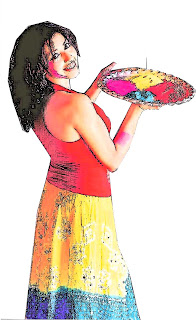 Children, friends and neighbours gather on the streets and a riot of colour takes over. Coloured Justify Fullpowders known as ‘abeer’ or ‘gulal’ are thrown into the air and smeared on faces and bodies. ‘Pichkaris’ filled with coloured water are sprinkled onto people. Water balloons are thrown at friends and neighbours in the spirit of fun. Sometimes, mud baths are prepared and people are ‘dunked’ into it amidst much laughter and teasing. The young visitors carry ‘abeer’ or ‘gulal’ to pay their respects to elders by sprinkling some on their feet. The younger crowd is drenched with buckets of coloured water and pummelled with water balloons. Indian drums are played and the songs of Holi are sung by the merry-makers.
There is no religious ‘puja’ or worship associated with this festival of colours as such. However, some ‘gulal’ or ‘abeer’ is smeared on the faces of statues of Lord Krishna and Radha, at the commencement of the festivities.
There are some quaint customs attached to this festival as well. Holi is celebrated in the country with great zest and verve. It is a time to remember the brightness and splendour of life, a time to spread happiness, colour and love into the lives of others. Holi is, therefore, aptly called the festival of colour. Its spirit is uniquely Indian, colourful, exotic and full of life.