Yes, the title of this blog exactly expresses my feeling for Adelaide. And I am sure you want to know the “whys” of it. So, here they are:

My very first feeling after landing at the Adelaide Airport was very comforting. Reaching down at the luggage area, I saw a long and wide area with a few conveyor belts and very few people (something I love about Australia). It was a compact airport where people could come to receive their near and dear ones right near the luggage belts. We were to be received by a chauffeur from Stamford Plaza Hotel, Adelaide. Our chauffeur was waiting for us near the conveyor belt where our flight’s luggage was to arrive He greeted us and lets us collect our bags. We took our individual suitcases and headed towards the car. And guess what? I was super thrilled to see the first thing I saw the moment we came out of the airport. It was the huge sign that allures me every time I see it, regardless of where I am and what I am doing. It’s IKEA! (My love for IKEA is well known among my friends now and that love for IKEA l is surely going to make another blog post altogether). Yes, there was a huge IKEA store right in front of the airport and I immediately added it to my “to do” list in Adelaide if time permitted.

The car was a sleek sedan complete with a few glossy magazines in the back pocket of the front seat; two bottles of mineral water and mildly fragrant wet tissues. The comfort level went up several  notches immediately. The driver/chauffeur was a middle aged gentleman dressed in a black suit, white shirt and a maroon bow tie. He started his car with small talk, anecdotes and trivia of the city turning the drive to the hotel to an interesting one. He introduced us to many establishments, shops, houses, roads, gardens etc. on the way to the hotel. He also told us about the who’s who of the Australian Cricket team, on who stayed there and those who have done great things for Adelaide. 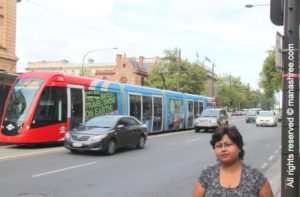 While listening to the chauffeur, I often drifted away in my world of thoughts, seeing the perfect sidewalks, the bungalows with picture perfect gardens, entrance gates with blooming creepers of different colours,  swanky cars parked under fairy tale lookalike garages and so on. Small girls with lacy frocks and pink ribbons walking on the sidewalks holding their mother’s hand, small cosy-looking bakeries with beautiful entrances, manicured and landscaped gardens, all made me feel l I was in a beautiful dream. The “oh so British” houses, castle like bungalows and a few more departmental stores and sports shops later, we reached our hotel. The hotel was beautiful, very welcoming and home-like. My home, if I was English, would have looked like this. Yes, it was a five star hotel but the décor of the room made us feel at home instantly. I was so excited that I was ready to go out and explore the city immediately after checking in in the hotel! The concierge of the hotel was very helpful and they suggested us to take the free tourist metro tram if we did not have any specific itinerary. We did as suggested and we got down at Rundle Mall area. It came as a surprise to us that everything was closed even though it was just a little past 5 pm. Later we were informed that everything closes at 5 pm in Adelaide. Amazing! So, this became our thumb rule during the rest of our stay. If we wanted to go shopping, we had to make it in the first half of the day itself. Though the shops were closed, the decoration of the area was so much fun! The New Year Eve was just over and they had not taken the decorations out yet. Some of the decorations were from the Christmas celebrations too, making the area exciting and very colourful. 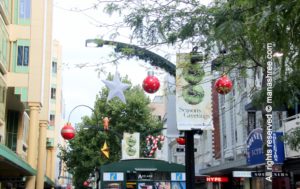 Having our fill in the Randal Mall area, we took the metro tram again and we had no idea where we were headed. A drunk/mad (?) person got into the tram too and nobody was willing to sit with him as he was talking something without stopping even to take breath. When we first took the tram, it was almost empty. So, there was no problem in sitting sparingly. However, the tram started to get crowded after a few more stations. To our surprise, a ticket checker came and asked for tickets from everyone. We were told this tram was free! Trapped! But without getting nervous, we told the ticket checker that we were told by our concierge that this was a free tourist tram service and we didn’t need to buy a ticket. We would, of course, if required, buy tickets now and/or pay the charges. The ticket checker patted our back and asked us not to worry as this tram was free till the end of the town and only after the last town station tickets were required. He also suggested that we could get down at the last station of the town and take a tram back to the hotel. Phew! Were we relieved?! We thanked him and got down at the last town station.

Crossing the tram line to take the return tram, we waited and waited and waited, reading almost all the signboards available for some information about the return tram. The two of us saw two more trams coming from the city and going to the suburbs. But there was none so far, even after almost 45 minutes, which would go back to the city! To our surprise, we found out from one of the last signs we read that the last tram to the city leaves at 6.20 pm and it was already 7.10 pm! Why didn’t we ask any of the passengers or any person in the station? Because there were none! Yes, people were rare and few! Though it was still sunny with the sun yet to set in, we figured out that we had missed the last tram. So, next stop, to hire a taxi and go back to the hotel. We stood by the side of the road and many tries later, a handsome gentleman with his sparkling white taxi stopped for us.

On our way back to the city, we were taken through a beautiful open garden area filled with colourful birds and children playing in the ground. We were hungry and asked if there is a place to eat. My partner and friend wanted to have Indian (yes, regardless of where we are, my guy wants to have only Indian food) and I was going to be okay with anything non-spicy and non-oily. The cabbie took us to the quintessential area of every big city – the Chinatown. He also guided us to the hotel (yes, a very nice gentleman), which was just a little walk away from the Chinatown area. We found an Indian restaurant in Chinatown but the menu screamed spices and oil. Some people may find it strange/funny/awkward, but yes, I decided to go to the next door Chinese restaurant and we both ate our favourite food in two different restaurants.

Post dinner we walked to our hotel recalling and enjoying every bit of the adventure that we had that day.

Next day, we were headed for the Barosa Valley tour. I am not a morning person but I still do not realise what got over me that day. Don’t know if it was the comfort of the hotel or the beauty of the city but I was all showered, clothed and ready at 6.15 in the morning to catch the bus from the hotel lobby! This makes for another travel story itself. Watch this space.