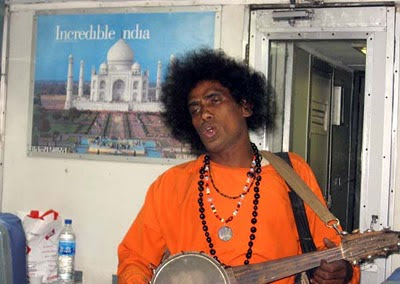 A baul singer of West Bengal

I was on my way to Shanti Niketan, in the Inter-City Express to Bolpur. One saffron gown clad man entered the chair car compartment. The thought – “here comes another magician, who would annoy every passenger by asking for money after he is done with his tricks” – came to my mind. But I was so wrong! Instead, this soft spoken man sang some soulful and melodious baul song. Keeping rhythm with his ghungroo on one of his ankles, he was creating effortless music with the dotara he had on his hands. Once he was done with his first number, the passengers requested for more. He obliged with a smile. I couldn’t resist the moment. I knew, I cannot get a better picture that says, “Incredible India” – literally!

You may like to know about:
Shanti Niketan
Baul Songs
Ghungroo
Dotara