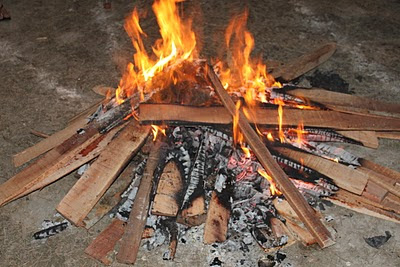 I am writing this blog with a smile on my face. I hope everyone who reads this blog feels the same joy while reliving the moments I am going to share here. I felt happiness and a great sense of belonging while celebrating Magh Bihu in Kolkata this year. Till the morning of Uruka day, the members of Sristir Ramdhenu (SR) had no plan of celebrating Magh Bihu. There were many hurdles to cross in the form of finding a place in Kolkata for bonfire, contacting all the members which meant uncountable phone calls, collecting money and so on. Since everyone is having full time jobs to attend to, it leaves them with very little time to think of anything else. However, on the evening of Uruka the Assamese spirit emerged with full vigour and the boys a.k.a. the most active members of the group decided to make Bhogali Bihu happen – no matter what. 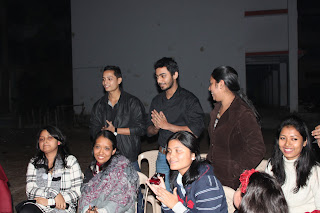 Unlike other past events, where I participated actively, I couldn’t do the same this time, as I had to attend to some medical issue at home. However, when the boys (Bhaskar, Uddipta, Hemanta and of course Proloy) contacted me, I was free enough to take part in it. Hence, I hopped on, in the organisation of the celebration too. We were in it together and we wanted to make the best out of this team of organisers. All the social networking groups/community sites were updated, members contacted and informed. The spirit of Magh Bihu was poking the members to do something about it and everyone said YES to the proposition. We all had smiles on our faces. 🙂 We will have Magh Bihu feast on the day of Magh Bihu (the day after Uruka). But we all know that a few hours delay hardly matters when there is so much of positivity involved.
Now, Proloy took the highest initiative by arranging for a place for bonfire and feast. It was a walled open space in the front yard of a school. Till late night of the Uruka day, we were on conference calls discussing, making lists of to dos and how to dos and so on.
Next day, the day of Bihu, Uddipta called and asked “Who would cook?” Bhaskar said (on con call) the boys can do it themselves. But I knew nobody had the experience of cooking for so many people at one go. We were 35 people and there were several items on the menu. Hence Uddipta and I decided to hire a cook. I started calling my contacts in Kolkata and luckily found a cook in such a short notice! Another hurdle crossed. Bhaskar and Uddipta went veggie shopping after consulting the cook. I offered to sponsor one of the must-haves/must eats of Magh Bihu, the Kaath alu. I also informed the boys that I would be bringing the sweets and it will be on me. I attended to home chores. Apart from phone calls, guests at home kept me busy.

Evening approached…umm…let me call it late afternoon. Proloy called me and asked if I am ready and going to the venue. He reached there before time to arrange the seating and bonfire etc. I said I’ll be there in 30 minutes. Hiranya called (he was given the charge of arranging firewood) and asked me if I can go to Panchanantala and bring the firewood in my car. Ahem, well, I know I am very accommodating, but firewood in my delicate Ford Fiesta? I suggested him to hire a cab instead. He got the point. I reached the venue and saw Proloy bickering with the cook and his helper. The cook was of the opinion that it was getting too late for the things to get ready and that might result in a very late dinner. We both made the cook understand that it wouldn’t matter and he can take his own sweet time to finish the dishes.
Uddipta and Bhaskar entered with a rickshaw-full of things. Madhurjya, a member of SR came in with his sister who was visiting Kolkata and missing home on Bihu. One by one, people started getting together and the chairs got all filled. Uddipta suddenly looked anxious and I enquired why. He asked what to do about drinking water! Hemanta suggested we buy mineral water bottles for all. But that would be expensive. I suggested we get those big 20 litre gallons of mineral water. Since I take those at home, I called up the water supplier and he said he kept two with the security guard of my apartment and I can take those. Problem solved. I went home and dumped the two 20 litre bottles of Bisleri water in the car dickey, collected the sweets and kaath alu and I was good to go for the night again.
Since many members and wanna be members knew my numbers, they started calling me to enquire about the direction of the venue. One of those calls was from Firoze Maran. The conversation went like this:
FM: Hello, are you organizing the Magh Bihu under Sristir Ramdhenu group?
Me: Yes we are and may I know who is speaking please?
FM: I am Firoze Maran and I am at Assam House now. Me and my friend thought we would celebrate Magh Bihu at the Assam House’s Magh Bihu celebration. But we are bored to death here. Can we come over to your celebration please?
Me: Of course you can. Just come over. We are at …..
FM: Okay we’ll be there.

Another call vibrated my mobile phone. Here’s the conversation:

I reached the venue. The bonfire was lit and that excited everyone with the real spirit of Magh Bihu bonfire. The kaath alu was put in the pile of burning wood for roasting. Now came the part when everyone had to introduce oneself to the others, so that if someone is new in the SR community, they would know who is who. This part was interesting for me too as I got to know a few new faces and their professions. Sristir Ramdhenu was getting richer with such valued new members. Once the introduction session was over, it was time for some real thing – Bihu songs and Bihu dance. Bhaskar, our community singer started singing some soulful yet melodious and peppy Bihu songs. The rest of the members got into the groove and all got up to shake that thing … you know what I mean. 🙂
Hiranya took charge of the kaath alu roast and served the same after peeling and cleaning those. Those were yum!

I must mention that Firoze Maran was one of the best Bihu dancers in the group of more than 35 people. Rituraj sang his favourite Bihu songs and Uddipta was encouraging him as well as Bhaskar. We all did not realize when the clock struck 11 pm. The food was ready by then and some of the children started yawning and pulling their mother’s clothes for want of some cozy place to sleep. So, we decided to serve food to the children first. Families who had to travel back far were served dinner next. The feedback on the food was absolutely positive. I was happy with the cook. All the members finished having food 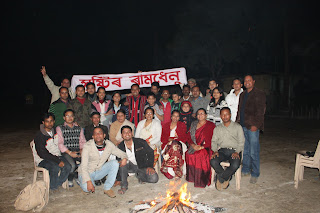 batch by batch. Sweets were served and during the entire time photographs were shot and video cameras were rolling. After food and a group photo session, members were leaving with a full stomach and a satisfied heart. It was past midnight and I was worrying how the girls will reach their respective homes. After arranging for car pools for some, I offered a home drops to six of them and they all hopped on my car. It was cramped with limbs going here and there to make space for everyone. I couldn’t stop laughing! Once the vehicle started to move, everyone settled down. Dropping them at their respective residences, I went home and reached home at around 1.30 am.
I was all smiles with a satisfied mind and soul. I sms-ed the boys congratulating them on the successful event. We all slept off wearing a smile on our faces.