Skip to content
A Still from Ganeshguri (Guwahati, Assam) Blast on October 30, 2008.
Now, what next? Do we wait to cry and remorse over another attack or do we actually do something to stop this? Last month end (October 30) my homeland Assam suffered the blow, this month end; it’s the dream city of India, Mumbai.

First of all, I salute the commandos of National Security Group, Marine Commandos and Mumbai police whose tireless effort won. But nobody can undo the damages done, lives lost and the dents made.

I think its time we give ourselves a New Year gift next month end. Let us all be a commando in our own way. Let’s pledge to be alert about our surroundings, be true citizens by being responsible towards our motherland. Let us not give in to anymore terror attacks, evil deeds. Let us be fearless enough to question and seek answers for these repeated attacks on humanity and for not doing anything about it. Let us be true Indians.

The Mumbai incident shows the involvement of Pakistan in more than one way. But is someone doing something about it? We are yet to see results of previous incidences that had claimed so many lives in Mumbai only. But the homeland of terrorists simply denies everything.

My feeling is, our GOODNESS is being taken as our weakness. But this Mumbai incident should be a proof enough to let the whole world know that, we are not here to succumb to evil forces. Evil deeds like killing innocent people, creating terror and destroying property can never give any good to anyone. The God the terrorists worship will also not approve of what they did. Because, every religion believes that GOOD always WINS over evil. 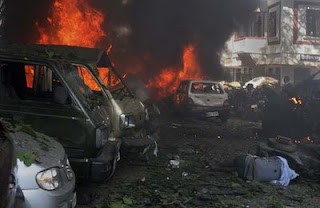 Another Still from Assam Blasts October 30, 2008

On a more personal level, however, I would also like to say something here. It seems the media, the Centre all care about the big cities and metros only. The bomb blasts that had happened in Assam on one single day did not get as elaborate a coverage as Mumbai did, though the lives lost and damages occurred was no less. Does that mean that the loss of lives in Assam is less important than Mumbai? Why there are no follow ups on that in any news channel? The government of Assam is doing nothing to catch the culprits, simply to protect their win next election. The greed for power is making each and everyone in authority, cheats. Ask any ordinary Assamese and he/she will say who is responsible for the blasts. But the government seems to have no clue. I felt like mentioning this, just as an additional food for thought.