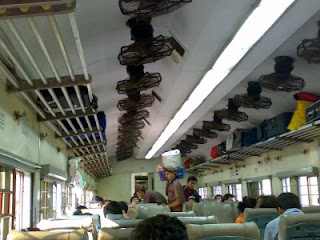 I generally dislike train journey by general class, meaning the class other than the air conditioned class. No, I am not a snob. But I just cannot take the smell of sweat and toilet cocktailed in the same compartment. It’s absolutely nauseating. This time, i.e. yesterday, I had to, yes “had to” board the general class chair car of Janshatabdi for a 4-hour journey to a nearby town. Janshatabdi has a very good reputation all over India for being one of the most efficient and good train services in India. Ok, I took the decision to check it out, hoping, may be, it’s general class chair car will be a little improved and better than other trains.

It was scantily occupied and the 3 : 2 seating arrangement was looking good. It was cleaner than I expected. Most of the window seats were occupied and I got one too. Great. 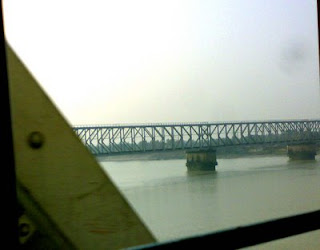 A river Bridge on the way

The journey started. I was happy to get a window seat. It’s late autumn and people would either not sweat or would sweat less. Even if some smelly cats do manage to board the train later, I had my windy window seat to give me fresh air from outside. The large window of the seat I occupied was to be shared by two rows of seats. A middle aged man was sitting on the window seat in front of me. Soon after the train started, the man seated in front of me, started sneezing once…twice…thrice…five times … without covering his mouth. Then he spat through the window! How disgusting was that!!! And guess what? He didn’t even say ‘excuse me’ or even ‘sorry’. Argh…utterly disgusting! I tried to protect myself from all the bacteria that was let loose in the atmosphere by covering my face. I cursed myself for not listening to my 6th sense. It was shouting its heart out asking me to give in to the second thought I had before boarding the general compartment. 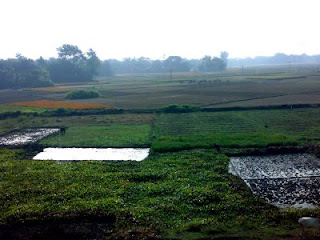 The Paddy Field and Flower beds
Well, after making me suffer like hell, he fell asleep. I thanked God for small mercies. Once the train started, I tried to enjoy the outside view and clicked a few landscapes that appealed to me.

Another passenger, a boy almost my age seemed to be a music lover. Well, by now, everyone in the compartment knew it. Some shrieking Hindi movie songs were playing in his all-in-one mobile phone and we had no choice but to hear it and bear it. Well, may be he was yet to be introduced to a thing called the ‘head-phone’; especially when travelling by a public mode of transport!

The train was scheduled at 6.20 in the morning. I was surprised at the “have seen all, done all,” couple sitting behind. They were some early risers and early eaters I guessed! The man was burping non-stop and yes, sitting on the front seat I could hear his amplified burps that must have given him a repeat taste of whatever he had gorged in the morning. Eew!!!!!!!

I thought and told myself, “am I over-reacting or is it meant to be always like this in this part of the train!?” Well, then I realised, it’s not the general compartment that was to be blamed. It’s the people. Why is it like this, that some people do not know the basic manners? I kept questioning myself…the whys and whats and hows…all kept coming to my mind but without any answer.

But yes, one thing is certain for me now, I will never travel general class again, no matter how short that journey is!